You are here: Home / Crime / Courts / Nitschke gets new charges for cooking new batch of meth 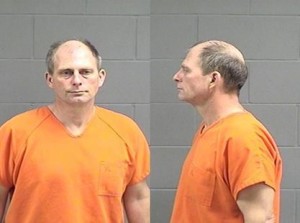 A Rhinelander man with a famous last name has more charges added to his court file after he allegedly violated the terms of his bond. Richard Nitschke, 49, had a bond hearing Monday for making and distributing methamphetamine during April. While out on bond earlier this month, Nitschke and his girlfriend Andrea Healey allegedly were caught cooking up a new batch of the illegal drug.

District Attorney Michael Schiek said officers responding to a warrant allege he engaged in a new production after another session where he was arrested.  “So it’s a new and distinct incident, separate from what happened between April 1 and April 30 that’s alleged in the other complaint. It’s new activity judge and is certainly grounds for new bail jumpings and new charges.”

On Monday, Judge Patrick O’Melia set a $10,000 cash bond on Nitschke for the April offenses. Since authorties allege Nitschke and Healey manufactured another batch after an earlier warrant was served, he was charged with two more counts and given another $5,000 cash bond by Judge O’Melia.