You are here: Home / Crime / Courts / No charges filed in Madison officer’s shooting of Tony Robinson 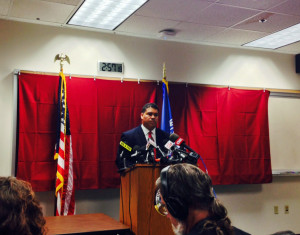 A white Madison police officer, Matt Kenny, who shot and killed Tony Robinson, an unarmed black teenager, will not face criminal charges. “I conclude that this tragic and unfortunate death was the result of a lawful use of police force,” said Dane County District Attorney Ismael Ozanne at the conclusion of a Tuesday afternoon press conference.

Ozanne’s decision not charge Kenny followed an investigation into the March 6th shooting, which was conducted by the Wisconsin Division of Criminal Investigation.

During his press conference, Ozanne related some of the findings of the investigation. Kenny was responding. The DA said that three 911 calls were made prior to Robinson’s death. The first was from a friend who said that the 19 year-old was “tweaking,” a second from a man who said he was punched by a person who matched Robinson’s description, and a third which said Robinson was yelling and had punched the caller.

Robinson was also reported to be shirtless, and running in traffic on Williamson Street.  Toxicology reports showed that Robinson had taken mushrooms, Xanax and marijuana, according to Ozanne.

Kenny shot Robinson 7 times at close range in a time frame of 3 seconds, and all shots struck Robinson front to back, Ozanne said. The shots were fired in the stairwell of a residence, after Kenny entered with his weapon drawn. Kenny said he feared he would lose consciousness if Kenny struck him a second time.

Ozanne, who is Wisconsin’s first Black District Attorney, made a point of asking for peace on Madison streets in the wake of his decision.

“I am concerned that recent violence around our nation is giving some in our communities a justification for fear, hatred and violence,” Ozanne said. “I am reminded that true and lasting change does not come from violence, but from exercising our voices and our votes.”

Following the press conference, Michael Johnson of the Boys and Girls Club of Dane County led a prayer for peace in a hallway of the Dane County Public Safety Building. Local clergy and faith leaders also gathered outside the Williamson Street apartment where the shooting took place. Robinson’s family was expected to address the DA’s decision later Tuesday afternoon.

Madison’s Young Gifted and Black coalition has announced plans for action on Wednesday, beginning with a rally at the scene of the shooting, and marching to the Dane County Courthouse.