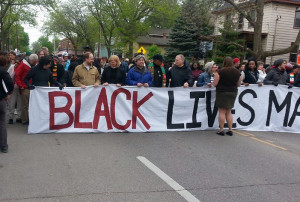 A crowd of people standing outside the apartment where Tony Robinson was killed grew quickly Tuesday, following news of the Dane County district attorney’s decision not to file any charges against the white Madison police officer who fatally shot the black teen.

Those gathering were greeted by members of Madison’s faith and black communities, who urged peaceful demonstrations. One organizer told the crowd “we are going to get justice in the most peaceful and respectable way possible. There will be no violence on our half, and I can promise you that on my soul.”

Members of Robinson’s family also urged those gathered to remain calm. His mother, Andrea Irwin, vowed to continue fighting for justice. She said “my son dying will be forever remembered as the day that we are going to change history” and later told CNN she is planning to file a civil suit.

Sharon Irwin, Tony’s grandmother, said “I don’t have an option to hold him anymore, and I want you to know that I miss him and really love him.”

Madison Police maintained a strong presence around the demonstrators, while nearly 100 citizen volunteers were also on hand to help work with the crowds. The crowd peacefully marched to the state Capitol and Madison police say no arrests were made.

More demonstrations are planned for today.