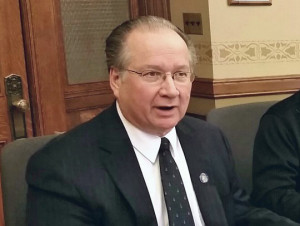 While the sheriff in Clark Count refuses to enforce Wisconsin’s Implements of Husbandry farm machinery laws, the author of the law says it did not change existing penalties for overweight machines on roadways. Sheriff Greg Herrick issued a statement Friday saying he is also a farmer, and has directed his deputies not to enforce the less than one-year-old law or the recent changes signed by the Governor a week ago. He claims the high fines are unconstitutional.

State Senator Jerry Petrowski (R-Marathon) is the author of the law and accompanying language. He said the law did not establish for being overweight. “The fine structure and everything has always been in place,” he said. “The Implements of Husbandry bill didn’t touch any of the fines.”

Petrowski said the misconception many farmers have is that they don’t have to follow highway weight limits or the reduced spring posted limits. “I know that some people thought that there was an exemption for weight for agriculture, but there has not been an exemption for being overweight for agriculture.” He adds, “I know that many of the farmers that have been stopped, at least one was cited, but I believe it was on the roads that were posted, and IOH did not take away any ability for local government to post their roads.”

The Senator says the Implements of Husbandry law addressed a problem created by modern farming, and that’s the increased sizes and weights of machinery used to efficiently manage acreage quicker. Petrowski says IOH was the beginning to addressing issues that had not been discussed before. “What the bill basically did was bring together all of the agricultural community to come up with something so they could continue to farm, use their heavy equipment, and give them a way to be able to get to their fields. It has not only increased the weight that was legal, but it also gave them the ability to get a permit, a no-cost permit, to be able to farm.”