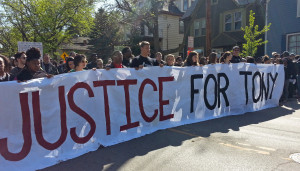 With chants of “no justice, no peace” and “we don’t want no killer cops,” hundreds of demonstrators again took to the streets of Madison Wednesday morning to protest a decision by the Dane County district attorney not to file charges in the shooting death of Tony Robinson, Jr.

District Attorney Ismael Ozanne announced Tuesday that he would not be charging Madison Police Officer Matt Kenny in the fatal shooting of the unarmed black teen on March 6. An investigation found Kenny shot Robinson during a confrontation in the stairway of a Madison apartment building, after Robinson attacked the officer. Ozanne found it was a justified use of lethal force.

A crowd of over 200 gathered outside the building where Robinson was killed to demand justice in the case and changes in the tactics used by Madison Police. Led by the Young Gifted & Black Coalition, they marched to the Dane County courthouse to hold a “people’s court” hearing of the case.

The protest snarled traffic through much of downtown Madison, as the group marched along major roads behind banners of “Black Lives Matter” and “Justice For Tony.”

Brandi Grayson with YGB helped list the group’s demands, which include releasing 350 black inmates from the Dane County Jail, a United Nations investigation of the Robinson shooting, and more community control of the Madison police force. Grayson said “what we need is power, to hire and fire…to set priorities, to set policies, and to say what kind of police model we want in our community.”

Protesters then occupied the street in front of the neighboring Dane County Jail and formed a “human chain” in front of a garage door entry way used to bring inmates in and out of the jail. They stayed in the space for several hours, before police began making arrests late Wednesday afternoon. A Madison Police spokesman says about 25 people were arrested and cited for blocking the intersection.

Madison Mayor Paul Soglin also said Wednesday morning that he recognizes the need for there to be protests by those who wanted to see criminal charges filed against Officer Kenny, and that the city needs to rebuild trust where it’s been lost and to “invest in equity and social justice.”