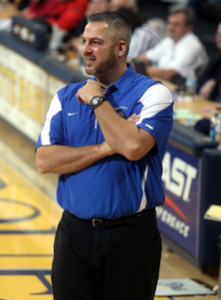 One of the most dominant runs in Wisconsin high school basketball history has lost the architect who built it. After 15 years as head boys coach at Germantown High School, Steve Showalter has resigned his post.

During his 15-year tenure, the Warhawks went 286-81 (.779), making six state tournament appearances, and winning three consecutive state championships in 2012, 2013, and 2014. After 27-straight wins this past season, Germantown fell to Stevens Point in the WIAA Division 1 title game as they attempted to become the first time in that division (and third overall in state history) to claim four championships in a row.

Showalter coached two Gatorade State Players of the Year in Ben Averkamp (2009) and Luke Fischer (2013, currently at Marquette). In addition, he helped dozens of student-athletes move on to play at the collegiate level, including his sons Zak (Wisconsin) and Jake (North Dakota State).

Showalter, who played for Bo Ryan at UW-Platteville in the late 1980’s, will join a staff led by Lance Randall. Randall played high school basketball at Iowa-Grant and coached Oshkosh West to back-to-back WIAA Division 1 championships in 2006 and 2007.