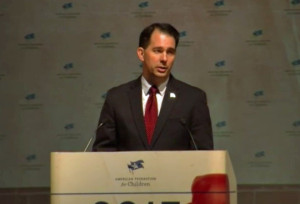 Governor Scott Walker says the debate over school choice and private school voucher programs is really one that should be above politics, and that he sees a “moral imperative” in making sure all children have access to a quality education.

Walker spoke Monday afternoon at an American Federation for Children event in New Orleans. He spent much of the 20 minute speech talking about efforts in Wisconsin to expand school choice programs and private school vouchers in Wisconsin. Walker said it’s an issue that should transcend partisan politics because “the future of our children in this country is of a higher importance than whether or not we can score political points.”

Walker’s budget calls for lifting an enrollment cap on the statewide voucher program, which would allow more students to attend private and religious schools using taxpayer dollars. He said part of the reason he wants to expand those options is to “put pressure on public school districts” to operate more like successful choice, charter, and virtual schools.

Critics argue expanding the voucher system will deprive public schools of already limited resources. The Legislature’s budget committee is scheduled to take up a plan to lift the cap during a hearing on Tuesday.