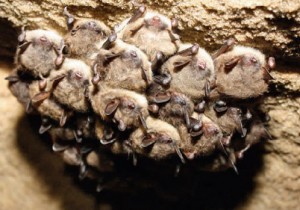 White-nose syndrome is continuing to spread in Wisconsin. The state Department of Natural Resources recently completed its winter survey for the fatal bat disease, and found it in a total of eight Wisconsin counties.

Bats at sites in Grant, Crawford, Richland, Door and Dane county have tested positive, while the fungus known to cause the disease has been confirmed at sites in Iowa, Dodge and Lafayette counties. White-nose syndrome was first detected in the state a year ago in Grant County.

The original point of infection in Grant County has experienced an overall population reduction of 70 percent from pre-WNS estimates, according to a release from DNR species management section chief Owen Boyle. The Grant County site is thus far the only affected location with a noticeable difference in population resulting from white-nose syndrome.

Although winter hibernation is over, the DNR will continue to review public reports and respond to wildlife mortality events in order to monitor the health of Wisconsin’s bat population. White-nose syndrome is a deadly bat disease that, among other things, can cause bats to frequently wake from hibernation – this can deplete energy reserves and lead to starvation and dehydration, or death due to exposure before the end of winter.