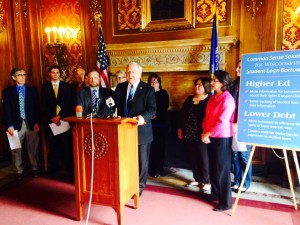 Democrats in the Wisconsin legislature are proposing the measure to allow student loans to be refinanced, much like car loans and mortgages.

“For some strange reason under the law right now, you can’t do with your student loan debt what you can do with any other commercial loan, whether it’s for a residential mortgage or for a car,” Mason said during a Tuesday press conference. “You can’t go out to the market and get the lowest possible loan rate.”

One of those residents is Briana Schwabenbauer, a recent UW grad. “Over the course of my lifetime I expect to pay over $60,000 back to the federal government and back to the banks in order to pay back my student debt,” said Schwabenbauer. “I’m not even going to make that much during my first to years of teaching.”

The bill from Mason and Hansen calls for the formation of a Student Loan Refinancing Authority, which would create and monitor a program to buy education loans and refinance them at a lower rate. That would be similar to how the Wisconsin Housing and Economic Development Authority already operates.

A similar measure failed to advance during the last session of the legislature. Last week, an amendment based on the bill was rejected by the Republican majority on the legislature’s finance committee.