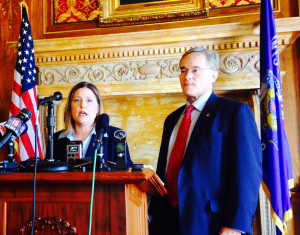 Democrats in the Wisconsin legislature want an outside probe of the Wisconsin Economic Development Corporation. They’re calling for a federal investigation, in the wake of a Wisconsin State Journal report that the owner of a Milwaukee construction firm received a half-million dollar business loan that Governor Walker’s top aides had pushed for. The 2011 loan’s recipient was a donor to the campaign of Governor Scott Walker, and the loan is now in default.

“At first, the loan that they were after was for $4.3 million,” noted state Senator Julie Lassa (D-Stevens Point), who noted that Paul Jadin, then serving as CEO of WEDC, raised concerns about the loan, which was made to Building Committee Inc.

Lassa serves on the WEDC board, along with Representative Peter Barca (D-Kenosha), who said an outside investigation is warranted. “We’ve passed the Rubicon,” Barca said during a press conference with Lassa at the Capitol on Monday. “We’ve passed the point in which believe that we can handle this internally within the board.”

In a statement, Walker spokeswoman Laural Patrick said the lawmakers have access to WEDC reports and staff, and that the call for an investigation is “political gamesmanship.” Walker on Friday asked lawmakers to end the loan program.

“Governor Walker once again proposed completely upending the state’s job creation programs, simply as a way of deflecting attention from the fact that his aides apparently used their influence to swing a WEDC loan to one of his campaign contributors,” Lassa said.

A WEDC spokesman said the agency is continuing to pursue all methods possible of collecting the BCI loan.

“From the time the loan was issued, WEDC diligently monitored and tracked this loan, and when it became clear BCI was unable to secure funding to repay the loan, WEDC aggressively pursued repayment, declared the loan to be in default, and ultimately secured a legal judgment against the company. We are continuing our efforts to have that judgment enforced,” said Mark Maley, WEDC Public Information Manager. “The decision to write off the BCI loan was included in a report that was presented to the full WEDC Board on October 21, 2014.”