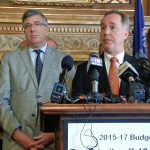 Republican leaders in the Wisconsin legislature said Wednesday that new revenue numbers will help them to narrow the focus on state budget deliberations. Assembly Speaker Robin Vos (R-Burlington) said his members want to focus on one thing, when it comes to allocating scarce new revenues.

“It was universal, among the 63 Republicans, that K-12 education funding should be our highest priority in this state budget,” said Vos. His sentiment was shared by Senator Scott Fitzgerald (R-Juneau), the majority leader in the Senate. “No doubt about it, to get back to fully funding K-12 and also consideration for some type of increase in the per-pupil amount, maybe in the second year,” Fitzgerald said.

As for the $300 million in cuts to the UW System included in Governor Scott Walker’s budget, all indications are that restoring any of that amount will take a backseat to K-12 funding. “If we’re able to find additional savings, part of those could go to the university, part of those could go to other areas, but we don’t want anybody to walk away without thinking that our top priority without any question is K-12 education,” Vos said. 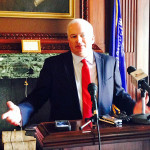 The Legislative Fiscal Bureau said Wednesday that there is no need to adjust revenue estimates it released earlier this year, which projected tax revenue growth of 3.7 percent for 2013-14. That’s just what legislative budget writers envisioned two years ago, according to Representative John Nygren (R-Marinette) who co-chairs the Joint Finance Committee.

“Some people will paint that as a negative. I would point out that meeting our expectations is actually a good thing,” said Nygren. “There’s other states in the country that are actually falling short of their revenue expectations.”

Democrats on the Joint Finance Committee also reacted to the revenue numbers on Wednesday, with Representative Gordon Hintz (D-Oshkosh) casting the news in a less favorable light than Nygren. “Their salvation was going to be this pot of gold that was going to appear in an April revenue report,” said Hintz. “Now that that has failed to materialize, I hope my colleagues on the other side will see the light.”

Senator Jon Erpenbach (D-Middleton) identified K-12, UW and long-term care as three key areas that the budget panel ought to focus on.