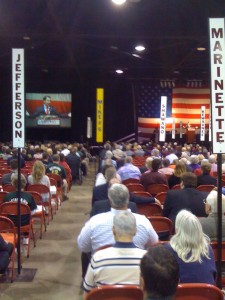 Republicans have plenty of reasons to celebrate, as they meet this weekend in La Crosse for their annual state convention. Their victories in the past year includes reelecting Governor Scott Walker and strengthening majorities in the state legislature. On the federal level, they also claimed control of Congress.

While they are enjoying those accomplishments, State Republican Party Convention chairman Julian Bradley says the focus this weekend will also be on gearing up for 2016 and getting back to the “roots” of the party. Bradley said “we are talking about getting back to our conservative roots, as we start heading in to the next election cycle.”

Bradley says there’s a lot of work ahead in 2016, with Republicans aiming to win the White House and defend Sen. Ron Johnson’s (R-WI) seat as he faces his first reelection attempt.

Delegates at the convention this weekend will hear from state legislative leaders, members of Wisconsin’s Congressional delegation, and Governor Scott Walker. The governor is expected to speak Saturday morning, before heading off to appearances in Iowa as he considers a potential 2016 presidential bid.