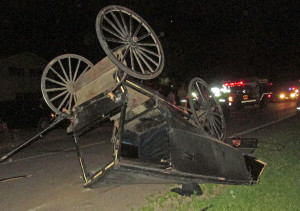 Nine people were injured when a van collided with a horse-drawn carriage in Chippewa County.

The Sheriff’s Office says it happened around 9:30 Wednesday night near New Auburn in northern Chippewa County.

Investigators say it appears the driver of the van could not see the carriage as the van pulled out of a driveway. The van hit the side of the carriage, causing it to roll over.

A mother and a 2-month-old baby were airlifted to a hospital in St. Paul. Six other passengers of the carriage were brought to local hospitals by ambulance. The driver of the carriage had minor injuries but refused treatment.

The horse and the occupants of the van were not hurt.

The crash is still under investigation.