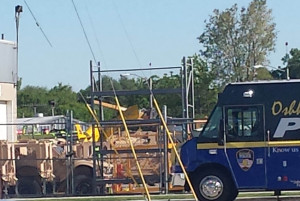 Two people are dead, following a small plane crash near the Oshkosh airport.

Fire department spokesman John Holland said the small yellow plane came down short of Wittman Airport at about 3:30 Tuesday afternoon, and crashed on property owned by the Oshkosh Corporation. The two people killed were both aboard the plane at the time of the crash. Their names have not been released.

Holland said the plane hit a number of military vehicles that were parked in a lot. No one on the ground was hurt.

There was no fire or explosion. The Federal Aviation Association and the National Transportation Safety Board will investigate the cause of the crash.