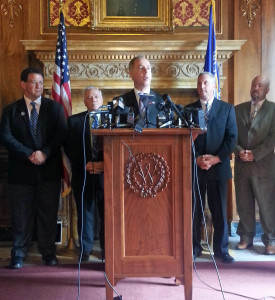 With a budget stalemate stretching out past the four week mark, Assembly Republicans are offering up a proposal they argue will help settle one of the remaining roadblocks to wrapping up work on the plan.

GOP leaders on Monday morning outlined proposed reforms to Wisconsin’s prevailing wage law, a system that requires workers on public construction projects to be paid a wage that’s determined using a state formula. Republicans and several advocacy groups have argued that repealing the law could save local governments and taxpayers millions of dollars, while eliminating costly and time-consuming administrative practices. Opponents of the move contend it would lower the quality of work done on important public projects, such as roads and bridges.

Under the plan from Assembly Republicans, public construction projects with a budget under $450,000 would be exempt from having to pay the prevailing wage. Assembly Speaker Robin Vos (R-Rochester) said that would keeping from applying to about 60 percent of the projects done in the state each year and called it “a major step forward.”

While Vos is confident the package has the support needed to pass in his chamber, its chances in the Republican-controlled Senate are less certain. Multiple members of that chamber have indicated they want a full repeal. State Sen. Steve Nass (R-Whitewater) said in a statement that the Assembly plan “intentionally fails to save the taxpayers and local governments the most money on the costliest of construction projects. I will stand with the taxpayers by only supporting a compromise that repeals prevailing laws on all units of local government.”

Vos fired back at those pushing for a full repeal, saying the Assembly plan makes “incremental” changes to the prevailing wage law. “There are some who will say if we can’t have everything, we should stand for nothing,” Vos said. “That’s not where Republicans have ever been. We make incremental reforms where possible.”

The prevailing wage is one of the remaining issues that have stalled state budget talks for the past month, along with transportation funding and financing for a Milwaukee Bucks arena. It remains unclear when lawmakers will be ready to vote on the budget.