You are here: Home / Brewers / Brewers announce signing of 16 players from 2015 Draft 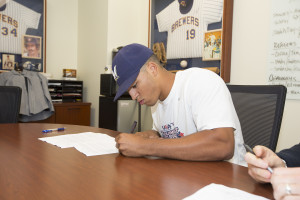 The Milwaukee Brewers have announced the signings of 16 players from the 2015 First-Year Player Draft.

The Brewers also signed two additional players who were not selected in the draft.  The Brewers selected a total of 41 players in the draft including 26 pitchers, 8 infielders, 3 outfielders and 4 catchers.