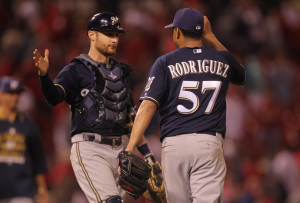 The Milwaukee Brewers entered Sunday’s series finale at Target Field in Minneapolis with a chance to sweep their first series of the season. Minnesota pitcher Mike Pelfrey had something else in mind.

Pelfrey scattered eight Brewer hits (7 singles) over eight innings, walking one and striking out seven, improving to 5-2 on the season.

Minnesota scored both of its runs in the second inning.  Torii Hunter led off with a walk and scored on Eddie Rosario’s double.  Rosario scored when Eduardo Escobar followed with a triple.

AUDIO: Craig Counsell says they had their chances against Mike Pelfrey :17

AUDIO: Mike Fiers on his outing :18

Francisco Rodriguez earned his tenth save of the season on Saturday, moving him into a tie for ninth place with Troy Percival on baseball’s all-time save list at 358.

Rodriguez and Percival were teammates in 2002.  They helped the Angels win the 2002 World Series and remained teammates until 2004 when Percival signed a free-agent deal in Detroit.