You are here: Home / Brewers / Brewers use top pick in amateur draft on high school outfielder 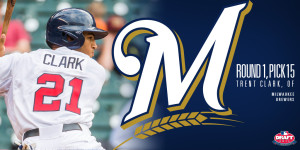 The last time the Brewers selected a college player in the first round was 2011 when they selected Taylor Jungmann and Jed Bradley with the 12th and 15th overall picks.  Jungmann is scheduled to make his major league debut with the Brewers in Pittsburgh tonight.

The Brewers did select a pair of 21-year-old college juniors with their final two picks of the night.  They selected left-handed pitcher Nathan Kirby out of the University of Virginia with the 40th pick and right-handed pitcher Cory Ponce out of Cal Poly-Pomona with the 55th pick.

AUDIO: Trent Clark on being called a professional hitter :11

Clark has a scholarship to play at Texas Tech, but Brewers GM Doug Melvin said signability doesn’t appear to be an issue.

“We draft them and then we worry about that later,” he said.  “It shouldn’t be a problem.”

Kirby went 5-2 with a 2.28 ERA in 10 starts at Virginia this season, but has been out since mid-April because of a strained a muscle.  He’s expected to be ready to pitch out of the bullpen in the College World Series.