You are here: Home / Business / Broad coalition calls on lawmakers to back Milwaukee arena plan 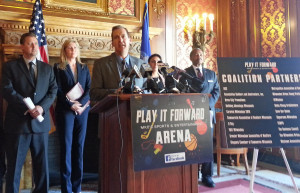 As debate continues at the Capitol over whether the state should help finance a new downtown Milwaukee sports arena, several business and community groups joined the call Monday morning for lawmakers to advance the plan.

The latest proposal, unveiled last week at the Capitol, would have state and local taxpayers picking up about half of the cost of financing the $500 million facility for the Milwaukee Bucks. It remains unclear if it has the support needed to pass though, or if the plan will be taken up as standalone legislation or as a part of the state budget.

During a Capitol press conference on Monday, Steve Baas with the Metropolitan Milwaukee Association of Commerce said they hope to show lawmakers how all of the state will benefit from the tax revenue the project will generate. Baas said “it doesn’t matter if you’re talking about schools in Stevens Point, or roads in Rice Lake, or social services in Shullsburg…it’s in your best interest to have this revenue coming into the state.”

Milwaukee Urban League president Ralph Holman said the project will help improve the lives of thousands of southeastern Wisconsin residents, by creating jobs, generating new taxes, and driving “economic vitality” across the region. Tracy Johnson with the Commercial Association of Realtors also noted that the arena would drive other development in Milwaukee, and would “serve as the tipping point for the renaissance of downtown Milwaukee.”