You are here: Home / Business / Bucks arena deal pitch: ‘cheaper to keep them’ 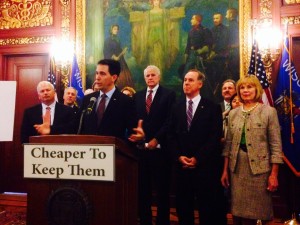 Elected officials will try to convince taxpayers – and potentially skeptical state legislators – that it’s cheaper to keep the Milwaukee Bucks NBA team in Wisconsin, rather than allowing the NBA to move the franchise to another city.

The specifics of paying for the projected costs of the project – which carries an price tag estimated at $500 million, were spelled out in a release from Walker’s office.

·         For every dollar the state invests, state taxpayers will get a $3 return through income tax revenue.

·         State and local governments will fund $250 million, or half of the total project costs, toward building the new arena without tax increases or state bonding.

o   The state puts forward $4 million per year for 20 years, with the total state investment capped at $80 million.

o   The city will contribute $47 million through the creation of a TID and paying for a parking structure in upfront cash.

o   The county contributes $4 million per year over 20 years through a state debt collection agreement.

Caps state contribution at $80 million toward the arena project.
Caps the total public contribution to the arena project at $250 million.
·         Claw back provisions included to protect both the state and local governments.  If the Bucks leave they will have to pay back the public investment.  The payback will be proportional to dollars contributed.

·         Maintenance and operations will be paid for by the team, not by the state or local governments.

The team and its partners will contribute 50 percent of the cost of the project with local funding coming in at 39 percent and the state contribution estimated at 11 percent of the total cost.

Walker said the cost to the state of allowing the team to be moved would amount to some $419 million over 20 years,  from loss of revenues and costs to maintain the aging Bradley Center where the Bucks currently play.

“Let’s be brutally honest here,” Walker said. “It’s not the owners, it’s the NBA board of governors that’s made it explicitly clear that if an arena is not up and going, at least en route by 2017, the team’s gone.”

With Abele and Barrett on board, it will fall to Republican legislative leaders to sell the plan to their members, either as part of the state budget or as separate, stand alone legislation.

“I don’t really have a handle yet on where the support is,” said Senate Majority Leader Scott Fitzgerald (R-Juneau) “That will take awhile.”

“Part of this process is also to make sure that the public is fully engaged, so they have an opportunity to tell us what they think,” said Assembly Speaker Robin Vos (R-Burlington). “I think when you look at the facts in an independent way, the answer is pretty obvious.”

“I was not at the table for these negotiations so I’m looking forward to learning the full details of the Bucks arena financing plan,” said Assembly Minority Leader Peter Barca (D-Kenosha). “I will be carefully reviewing the details and having discussions with our caucus in the days ahead.”