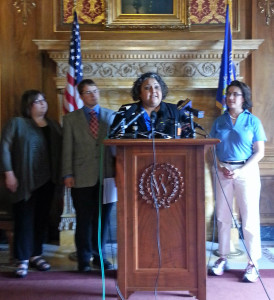 While it’s been unenforceable for much of the past year, some state lawmakers think Wisconsin’s gay marriage ban should be permanently removed from the state constitution.

The amendment, adopted by voters in 2006, was struck down in federal court in June of last year. Following last week’s ruling by the U.S. Supreme Court that legalized gay marriage nationwide, state Rep. JoCasta Zamarripa (D-Milwaukee) believes Wisconsin should act to ensure the state is “on the right side of history by physically removing this discriminatory language from our state constitution.”

Zamarippa is co-sponsoring a proposal that would repeal the amendment. The measure would have to pass two consecutive legislative sessions and win voter approval, before the language could be removed.

Assembly Speaker Robin Vos (R-Rochester) said Monday that he sees no need to make the change and accused Democrats of trying to “make a political point” by proposing the change. Backers note that public support appears to be on their side though, with polling showing at least 60 percent of Wisconsin residents support same sex marriage.