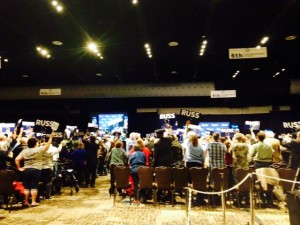 Wisconsin Democrats are eager to defeat Republican U.S. Senator Ron Johnson, and they’re banking on former Senator Russ Feingold, who lost to Johnson in 2010, as the candidate who can get the job done.

Baldwin, Pocan and Moore all touted the importance of electing Feingold because his opposition to foreign trade deals which have shipped jobs overseas and disadvantaged American workers.

“We need to win back the Senate Majority, and we can’t do it without this seat,” Baldwin said, adding that Feingold would “make sure Wisconsin workers don’t get screwed by another bad trade deal,” referring Trans Pacific Partnership.

“No more throwing away our jobs with secretive trade deals that are sold on the false goal of elusive global profits,” Feingold said, promising to end the GOP’s “corporate-written, anti-worker, anti-middle-class playbook.”

Feingold drew chants of “we want Russ,” from delegates. “Thanks,” he said. “It’s good to be back.”