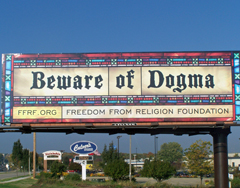 Anne Nicol Gaylor, a co-founder of the Madison-based Freedom From Religion Foundation, has died. A statement on the group’s website said the 88 year-old Gaylor died just before midnight on Sunday at a hospice in Fitchburg. She had been hospitalized since May 30 following a fall at in her independent living apartment in Madison.

Gaylor formed FFRF with her daughter Annie Laurie Gaylor in 1976, and served as the organization’s president from 1978 to 2004, a period which saw it grow into a nationally prominent group. Under Gaylor’s leadership, FFRF filed lawsuits challenging religious pracices in government organizations and schools, including things like Christmas Natitivity scenes on public property.

No memorial service will be held, at her request. And her tombstone in her family’s plot in Sparta will be inscribed “Feminist – activist – free thinker.”