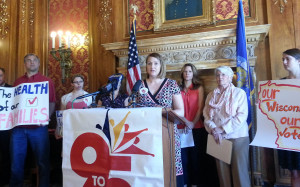 A broad coalition of health and community groups are urging lawmakers to drop talk about repealing Wisconsin’s Family and Medical Leave Act.

Some Republican leaders have indicated they are open to the idea of repealing the state law using the state budget, with the federal version of the law still protecting workers’ ability to take leave from a job for family or medical issues. Groups opposed to the move gathered at the Capitol this week, arguing it would be a step in the wrong direction for Wisconsin.

Wisconsin’s law was adopted in 1988 and was used as the basis for the federal law. Sara Finger with the Wisconsin Alliance for Women’s Health argued the protections offered through the state’s FMLA are much stronger than those in the federal version. She said the change could mean that individuals may not be able to leave work to care for a sick in-law or domestic partner, fewer part-time employees would be covered, and some businesses with a small number of employees would no longer have to comply.

Former Madison Mayor Dave Cieslewicz, who worked in the Legislature when the state law was passed, said it’s a policy issue that could be taken up without any public debate if it’s included in the budget. Cieslewicz said “they’re not going to listen to employers who might say they benefit from having employees who can actually take time off to care for sick relatives, so that they’re actually more focused on the job. They won’t hear from them…they won’t hear from anybody.”

Despite the opposition, even some who back the idea of making the federal law the standard in Wisconsin admit it’s unlikely to happen through the state budget. Assembly Speaker Robin Vos (R-Rochester) said Tuesday that he supports the idea of trying to “federalize” family medical leave, but doubts it will be included in the budget package.