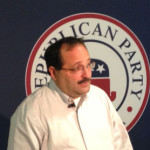 No one in a huge field of GOP presidential hopefuls which includes Wisconsin Governor Scott Walker had agreed to participate in the Iowa Straw Poll, so Iowa Republican Party leaders have canceled the event. Iowa GOP chairman Jeff Kaufmann met by phone with members of the party’s state central committee Friday morning.

“If you do not have candidate interest, you do not have the financial dollars to actually even break even,” Kaufmann said immediately after the decision was made. “…We set the table and they didn’t come to dinner.”

It was a unanimous decision, but Kaufmann told reporters from Radio Iowa and The Des Moines Register he is disappointed. “I’m a rural guy. I’m a history teacher. I like traditions. The candidates chose to not go with this tradition,” Kaufmann said.

The event started as a low-key barbecue fundraiser in 1979 and gained a foothold in political lore when George Herbert Walker Bush was the surprise winner over Ronald Reagan. But Michele Bachmann’s 2011 Iowa Straw Poll victory is often cited as an indication of the event’s poor record in predicting the winner of Iowa Caucus night, as Bachmann finished last in the Caucuses.