You are here: Home / News / La Follette ‘sad and sickened’ by changes to office (VIDEO) 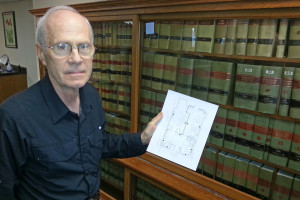 Secretary of State Doug La Follette holds up a draft of the basement office he will share with the state treasurer. A blue sticky note is affixed to the book cabinet, indicating the shelf must go to the new location. (PHOTO: Jackie Johnson)

The office of the Secretary of State is located on the Capitol Square with a close-up view of the dome, but a provision in Wisconsin’s two-year state budget requires the office be moved to the basement of the statehouse. Secretary Doug La Follette said it makes him want to “just quit.”

La Follette, who turns 75 on June 6, said it’s “frustrating” being up against the legislature and the governor who “have all the power.” He asked, “Can I stay and fight from the basement of the Capitol? Or am I better off to quit and find some other way to raise heck with the people that are destroying the state of Wisconsin at the moment?”

The Madison Democrat has held the office for more than three decades. Majority Republicans have gradually stripped duties from the Secretary of State office over the years. The legislature’s budget-writing committee just last month signed off on deep cuts to the office, including the elimination of two of three staffers, the reduction of agency operational funding, and a relocation to the Capitol basement.

The basement office wouldn’t be “user-friendly,” La Follette claimed. He also wondered whether it’s legal to limit public access by occasionally being forced to close up shop as a result of a reduction in employees.

“We’ve already had to close at noon because we have limited staff,” he said. “Now we’ll only have one staff person, I can imagine the office being closed sometimes for half a day or maybe all day.”

La Follette has placed blue sticky notes on everything in the office he needs to take with him, but only has 400 square feet to work with in the new location — down from roughly 4,000. (Accounting for the space used by the two employees who’ll be eliminated, that leaves 3,000 square feet, he said.)

Republicans argue the office relocation and reductions in staff are reasonable cost-saving measures.

The new office will be shared with the State Treasurer, but separated by doors that will need to be permanently locked in order to avoid having an open meetings violation — both elected state officers are members of the State of Wisconsin Board of Commissioners of Public Lands (along with the state attorney general). Two of them together would inadvertently be a quorum.

An elevator will have to be re-programmed to allow public access to the basement.

The lease at his current location expires at the end of the month.