You are here: Home / News / Landmark tower in Two Rivers comes down (VIDEO) 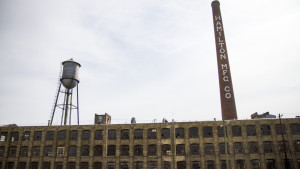 The former Hamilton Manufacturing company smokestack, which towered over downtown Two Rivers for more than 100 years, is gone.

Greg Buckley is City Manager. “The Hamilton name has meant so much through the history of Two Rivers. Not just as an economic factor, but really intertwined with the whole history and the pride of this very small town.”

The detonation of the 230-foot brick structure in east central Wisconsin was witnessed by thousands of people early Sunday afternoon and video-taped by Herald Times Reporter.

Buckley said it was a day of mixed emotions. “We’ve got a lot of people here whose moms and dads, grandparents, great grandparents made that great company, built this community. At the same time the handwriting was on the wall. For two years now we’ve known that we’ve had an empty facility.”

Two generations of Pam James’ family worked at Hamilton. “My father George worked there and my grandfather Clarence worked there, also. Yes, many memories of Hamilton,” James said, “Many memories of going to the office with my dad. It’s sad, but it’s a good thing, also.”

The company closed in September of 2012.

The smokestack was the last remaining structure on the 12.5 acre company. “To see this stack coming down, it’s a final farewell, a final sulute,” Buckley said. “We look forward to a bright future for this site and for our community.”