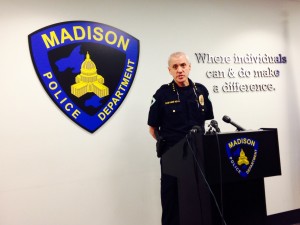 A white Madison police officer, cleared of wrongdoing by a departmental review in the March shooting death of an unarmed black teen, will not immediately return to street patrol. Police Chief Mike Koval addressed the status of Officer Matt Kenny during a press conference on Wednesday afternoon. Koval called what comes next a “transitional plan” for Kenny, who has also been cleared of any criminal wrongdoing in the death of 19-year-old Tony Robertson.

Koval made it clear that there will be no predetermined timeline for Kenny’s return to patrol duties. “Before we can go much further, now he has to still do some things that are a part of our officer involved shooting protocol,” Koval said. That will include meeting with the department’s trauma specialist.

An investigation by the state Department of Justice concluded that Kenny shot Robinson 7 times in the stairwell of an apartment home on March 6th, after Kenny responded to 911 calls that Robinson was running through traffic and assaulting people. Dane County District Attorney Ismael Ozanne used the DOJ report, in deciding that Robinson’s death was the result of a lawful use of police force.

Similarly, the investigation conducted the Madison Police Department’s professional standards and internal affairs division, was forwarded to Koval, who determined that Kenny did not violate any department standards in connection with Robinson’s death.

A coalition known as Young Gifted and Black posted a response to Koval’s decision on its Facebook page.

“There is nothing surprising about this decision. This is another example of what happens when you allow the police to police themselves. They protect their own. Oppressors never see themselves as such. This is why we are calling for community control over the police, so us the people can decide if an officer should continue being one. We are also calling for the UN Human Rights council to conduct a truly independent investigation into the murder of Tony Robinson. Sign the petition.”

Koval, who referred to Kenny as “a service guy” whose preferred job is patrol, said he wouldn’t preclude the officer’s eventual return to that. “Obviously, not in the near future,” he said.