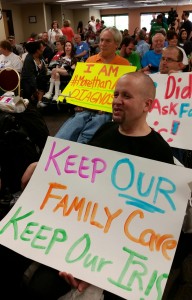 Stephanie from Waukesha has a 22-year-old son with medical issues. She said Wisconsin’s most vulnerable citizens rely on the state’s long-term care system for elderly and disabled people. “We need to know the systems will still be there and continue meeting their needs. We need to be listened to and heard by our elected officials and have them respond appropriately by removing long-term care from the proposed budget.”

She was one of several advocates meeting in Madison Tuesday in their effort to join forces and explain to lawmakers the necessity for leaving the state’s long-term care system alone, with no changes. Advocates want IRIS to continue to exist as a separate Medicaid waiver program.

Julie Burish of Brookfield is a member of the grassroots group called Save Iris. She said the proposed changes need to be removed from the budget and discussed at length — as separate legislation, if necessary — while including all the stakeholders in the conversation. “Let’s pull this out; let’s give it the light of day; let’s treat it with the respect that we all deserve; and let’s bring everyone to the table and let’s come up with something that’s gonna work for us and it’s gonna work for Wisconsin and that we can all be proud of.”

Burish said IRIS is a valuable, cost-effective program giving people greater control over their lives in their own homes. Republicans on the legislature’s Joint Finance Committee have said they have significantly improved the governor’s original plan.

The “grassroots coalition of parents and self-advocates” met in the capital city Tuesday to lobby their lawmakers.

JFC approved big changes to the programs in late May, but less severe than what Governor Walker had proposed. The budget-writing committee has not yet finished the budget, which needs to be approved by the full legislature before the governor reviews it and signs it.