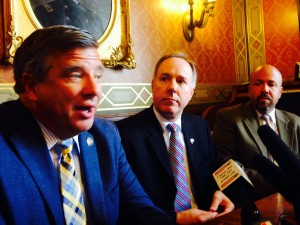 “We accomplished all of our goals, and that really limited the state’s obligation to much less than what the state will gain over time as the arena is built and the Bucks stay,” Steineke said. Under terms of the bill draft, the state’s share of the $500 million dollar project will be $55 million – about equal to the share from the city and county, according to Vos.

“I think the three of us, and our entire caucus, share the same goal, and that’s to have the least expensive option for the state, while providing the best possible venue,” Vos said.

Nygren, who co-chairs the Joint Finance Committee, said the deal as written can pass the committee and the full Assembly. “I think we’re in a much better position today than we were, and I think we’re also in a position where we could go to the Assembly floor . . . and pass the proposal as is,” he said.

Governor Scott Walker’s original budget proposal called for using about $220 million in bonding to help finance the arena, which the NBA says is needed to keep the Bucks. That’s a level of bonding which many lawmakers, including Vos, balked at.

Still not clear is whether the arena deal will be included in the budget, or considered as stand alone legislation. Vos said it was important for the public, as well as members of both legislative chambers, to consider the draft, details of which are included in a memo from the Legislative Fiscal Bureau.

“I look forward to feedback from the members of the Senate and the public as they review the full details of this proposal, and will continue to work with all parties involved to ensure that any deal that keeps the Bucks in Milwaukee is a good deal for Wisconsin,” said Senate Majority Leader Scott Fitzgerald (R-Juneau).

Senator Chris Larson (D-Milwaukee), one of three Milwaukee Senate Democrats who met with Fitzgerald last week to discuss the arena deal, said the release of the draft “shows our efforts to bring transparency and public scrutiny to this issue are starting to succeed.”

Also on Monday, Vos indicated that a deal on the state budget deal may be ready this week, although not prior to the start of the new fiscal year on Wednesday. “I feel good that we’re making progress,” Vos said. “I honestly believe that we can find an answer by the end of the week, but we also have some sort of deadline, so we’re not just sitting here staring at one another for months on end.”

Vos noted that there are still several budget sticking points – including transportation – between Assembly and Senate Republicans. “I think we’re getting closer and closer on transportation, so I feel pretty good about that, that maybe we’ll be able to have some sort of announcement sometime this week, that maybe finance could go in. I’m really an optimist.”

It’s been thirty days since the Joint Finance Committee – which is charged with hammering out the details of a budget – last met.