You are here: Home / Crime / Courts / Standoff in Bancroft ends with homicide arrest 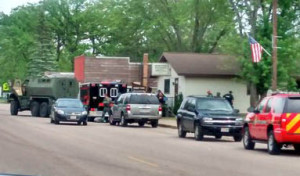 A Bancroft man is facing homicide charges in the death of his wife, following an almost four hour standoff with police on Wednesday.

Portage County Chief Deputy Sheriff Daniel Kontos said they received a 911 call at 10:52 a.m. about a possible shooting at a home in the town of just over 500 people. Kontos says when they arrived, they found the body of 47-year old Lisa Sanchez at a neighbor’s house. Her husband, 55-year-old Larry Sanchez, had barricaded himself inside of his home.

The Sheriff’s Office Special Response Team was deployed to the scene, and Larry Sanchez was taken into custody, uninjured, just before four in the afternoon. He is currently being held in the Portage County Jail on homicide charges.

Knotos said Sanchez is believed to be the only suspect in the incident, and there is no longer any danger to the public.