You are here: Home / Fires/Accidents/Disasters / Storms cause damage across southern Wisconsin 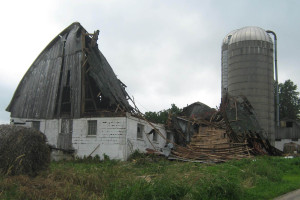 Storm damage to a barn in Crawford Co. (Photo: WEM)

Wisconsin Emergency Management officials are detailing more of the damage done by severe thunderstorms that swept across southern portions of the state Monday.

The agency says 20 homes and 30 farm buildings were either destroyed or severely damaged in Grant County, while another 300 homes had moderate-to-minor damage. Most of the wreckage was in the Lancaster, Platteville, Cassville, and Hazel Green areas.

In Crawford County, a mobile home was destroyed in Wauzeka, while another house lost part of its roof. Flood waters damaged a restaurant in Steuben. A home was destroyed and six others had minor damage at Hollandale in Iowa County, and five homes were damaged by fallen trees in Linden. Damage near Hollandale and Blanchardville was the result of straight-line winds of up to 100 miles an hour.

In Green County, officials said a woman was cut by glass in her home. Damage to seven homes and seven farm buildings totaled an estimated quarter-million dollars. That also includes crop damage.

A total of about 54,000 customer lost electricity following the storms. Less than 1,400 were still without power as of Tuesday afternoon.