You are here: Home / Legislature / Talks continue on Wisconsin budget 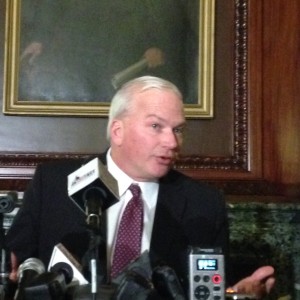 Majority Republicans are still trying to wrap-up negotiations on the state budget, with closed door meetings going on this week at the Capitol. It’s been more than two weeks since the Joint Finance Committee last met, although much of the two year spending plan has already been finalized by the panel.

Transportation funding remains one of the more contentious areas that remain, with lawmakers still trying to decide how to handle the $1.3 billion in borrowing Governor Scott Walker initially proposed. Republicans leaders have indicated they want to see the amount reduced, with Assembly Speaker Robin Vos (R-Rochester) saying last week that he wants it dropped by at least $800 million. Senate GOP Leader Scott Fitzgerald (R-Juneau) said on Tuesday that they are looking to hit that amount, but “we just don’t have that kind of number that we think is sellable yet.”

Fitzgerald and other Republicans met Monday night to discuss the budget. He said they talked about transportation funding and taxes, but did not touch on a taxpayer funding plan for a new Milwaukee Bucks NBA arena or calls to include a repeal of the prevailing wage in the state budget. Some GOP lawmakers have said they will not vote for the budget if the arena is included or if prevailing wage is left out.

The Finance Committee has not yet scheduled its next meeting. One of the co-chairs indicated Tuesday that the panel would not be in on Wednesday, and it remains unclear if lawmakers will return to finish up their work this week at all. When asked if the committee would be back on Thursday or Friday, Fitzgerald only said “I’m hopeful.”