You are here: Home / Education / Walker rides his Harley at weekend event in Iowa 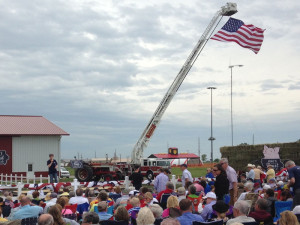 About 1,500 Republicans gathered near Boone, Iowa, over the weekend to eat pulled pork for lunch and listen to seven Republican presidential hopefuls – including Wisconsin Governor Scott Walker – boast of their own records and roast President Obama, Hillary Clinton and, sometimes, one another.

Iowa Senator Joni Ernst greeted the crowd shortly before two o’clock. “This is my first inaugural ‘Roast and Ride,’” Ernst said. “We do hope we will do this every year, so start looking ahead at next year on your calendar and prepare, because I think it’s going to be twice as big next year.”

Ernst and Walker – a likely, but not-yet-declared candidate – were at the front of a line of more than 300 motorcyclists who went on a 45-minute road trip from Des Moines to Boone that ended at event site. During his turn on stage, Walker emphasized foreign policy, with a warning about “radical Islamic terrorism.”

“We need a president in this country who’s going to stand up and tell the American people what may be hard to say, that this threat isn’t like the Cold War where containment isn’t enough,” Walker said. “No instead, this is like a virus and if we don’t take it out, we’re in trouble.”