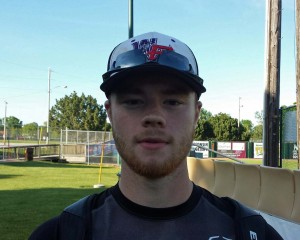 Tuesday, in the opening round of the Division 1, WIAA baseball regionals, Watzka added to his list of late season brilliance, tossing a no-hitter in the Devil Cats 2-0 win over the Rhinelander Hodags.

Watzka admitted afterwards that he didn’t feel he had great stuff, not like he did in the win over Preble last Thursday.  This time his defense was more involved, helping back Watzka in the win.

The win is the 15th of the season (15-11) for East/West, which is a remarkable improvement from a year ago, when the Red Devils won just 6-games.  Two years ago, the program had just 3-wins.

The difference isn’t just displayed in the win/loss column.  When you watch this team play, you see a team that has learned how to win close games, learned how to come from behind and even in defeat, has given the opposition all they can handle.

For Watzka to get another shot this season, East/West will have to win on Thursday at Pulaski.  They’ve already beaten Pulaski twice this season.

A trip to next week’s sectional tournament goes to the winner.

Jake Watzka has been solid all season, but he’s taken his game to another level in the last two outings.  The Devil Cats are hoping to see Watzka toe the rubber at least one more time.

Note:  With East/West’s 9-game improvement, their head coach Pete Bauer has been awarded the Fox River Classic Conference Coach of the Year award!