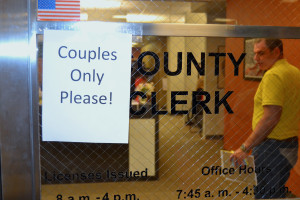 The U.S. Supreme Court’s decision on marriage equality is being hailed here in Wisconsin. “Social justice was advanced today,” said Chris Ahmuty with the American Civil Liberties Union of Wisconsin. “People who previously had been disrespected by their government, had been harmed by actions taken by the government, will finally be treated with the equality and dignity and freedom that they deserve from their government.”

The court’s 5-to-4 decision makes equality of marriage the law of the land in all 50 states.

Ahmuty said the decision should put the issue to rest once and for all. “I wouldn’t say that there won’t be some sort of push back from opponents of freedom to marry, but this is the final word until there’s a new supreme court 50 years from now, or something like that.”

Governor Scott Walker said the  high court made a “grave mistake” with the decision to legalize gay marriage in all 50 states. Wisconsin Family Action President Julaine Appling accused the majority of playing favorites with the law to advance a position it favors, while ignoring the will of the people in states across the country.

Same sex marriage has been legal in Wisconsin since last October, when the Supreme Court rejected the state’s bid to reinstate its constitutional ban.