You are here: Home / Health / Medicine / Wisconsin bill would ban abortions after 20 weeks 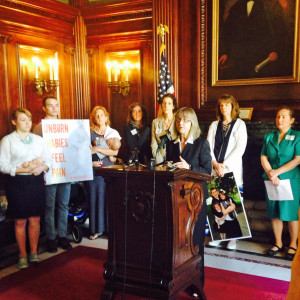 A bill prohibiting abortions after 20 weeks received a hearing before a pair of legislative committees at the Capitol on Tuesday. Senate author, Senator Mary Lazich (R-New Berlin), said the bill has been mischaracterized in the media. “The bill is being characterized as prohibiting rape and incest abortions,” Lazich said a press briefing prior to the public hearing. “That is not what this bill is about.”

Proponents say the bill prohibits the procedure once a fetus can feel pain. Some Republicans differ with the commonly accepted consensus among the medical community on when that happens. Assembly author, Representative Jesse Kremer (R-Kewaskum), questioned Dr. Kathy Hartke, who chairs of the Wisconsin Section of the American Congress of Obstetricians and Gynecologists.

“Do you believe that a child at 20 weeks or five months can feel pain?” Kremer asked. “I do not believe that a fetus feels pain until the third trimester,” Hartke said.

Doctor Tosha Wetterneck with UW Medical School, and a former president of the Medical Society of Wisconsin, testified against the measure, which Governor Scott Walker has already said he’ll sign. “We can’t allow this to happen. It’s not acceptable” Wetterneck said. ‘The public needs to know that if this happens, that physicians will not be able to adequately take care of many pregnant women.”

Maureen L. Condic of the University of Utah School of Medicine testified in favor of the legislation. “I’m appalled that in a civilized country, we allow a level of violence against other humans, that we would not allow against animals,” Condic said.

The legislation includes penalties for doctors who perform or attempt to perform abortions after 20 weeks. They could be charged with a felony, carrying three-and-a-half years in prison and a $10,000 fine. Another provision requires that doctors be allowed to end a pregnancy in a way that “in reasonable medical judgment, provides the best opportunity for the unborn child to survive,” in a case where the mother is facing a medical emergency. And the bill makes no exceptions for pregnancies resulting from rape or incest. Lazich maintained that those procedures usually are done much earlier.

Committee members are expected to vote on the bill on Thursday.