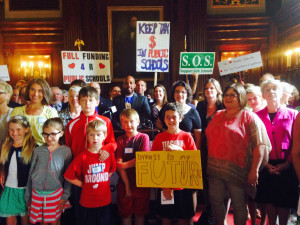 A coalition of public school supporters, unhappy with education provisions slipped into the state budget, rallied at the Capitol on Tuesday in support of Democratic legislation aimed at increasing per-pupil revenue limits for local districts, and increasing reimbursement rates for special needs programs.

For education advocates like Joanne Juhnke with the group Wisconsin Family Ties, there’s plenty to dislike in the budget. “Take special needs vouchers,” she said. “Take them and throw them out of the state budget.”

“In Wisconsin it does matter where you go to school,” said Jill Gaskell, a school board member in the Pecatonica Area Schools. Gaskell maintained that expansion of the state’s private school voucher program is going to hurt all public schools, by diminishing the amount of taxpayer support available to them. “Education is not equal in our state. The expansion of the private school voucher program included in this budget will hurt rural school districts, even though we have no private voucher schools in our area.”

“Lawmakers say private vouchers are a matter of choice, that they are parent driven,” said Kathryn Carley, a parent in the Green Bay School District. “How can it be parent driven when the number of parents asking and even applying for private vouchers is down? The parents of Wisconsin have made their choice.”

The bills proposed by state Representative Mandela Barnes (D-Milwaukee) will likely have difficulty gaining traction in the Republican-controlled state legislature. “If these two simple measures aren’t taken into account, who knows where we’ll be? We’ll be a Alabama or a Mississippi, a Tennessee, and Arkansas, a South Carolina,” Barnes said.

They also railed against the expansion of the Wisconsin Parental Choice Program, even though the measured approach by the legislature would only allow for less than 1% of education funding over the next decade to go towards the program.

Sandy Whistler, with Citizen Advocates for Public Education, said the bills represent a broad consensus. “What we propose today is what districts and parents all over the state have been asking for all along,” she said.