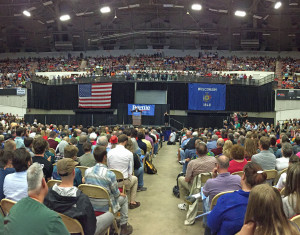 U.S. Senator Bernie Sanders had an appreciative audience in Madison Wednesday night, as the Democratic presidential candidate barnstormed at the Alliant Energy Center. Sanders touched on a variety of domestic policy issues, but focused on what he refered to as a “grotesque” level of economic inequality. He spoke for an hour before a near capacity crowd at the arena, which seats about 10,000. The Vermont liberal said it was the biggest crowd of any candidate rally thus far in the presidential election cycle.

Sanders, who is challenging Hillary Clinton for their party’s nomination, called for “a political revolution,” and said that income inequality represents the great moral, economic and political issue of our time.

“The time has come, when people in Wisconsin, Vermont and all over this country, create a political movement which says to the billionaire class ‘you can’t have it all,'” Sanders said. “What we are saying to the Koch brothers, Governor Walker and all of those people, is that this great country and our government, belong to all of the people, and not just a handful of very wealthy people.”

Sanders, a self-described democratic socialist, has served in the Senate as an Independent since 2007. Prior to that, he held Vermont’s single seat in the House of Representatives since 1991. Sanders called for the breakup of Wall Street’s largest financial institutions and for free tuition at all public colleges and universities in the U.S., pledged not to nominate any U.S. Supreme Court justices who are not committed to overturning the Citizens United decision, and to pursue reform of policing policies.

“Our job is to make sure that young African-Americans can walk down the street, without being abused or worse,” Sanders said.

While conceded that his opponents will be much better financed, Sanders insisted that “if we develop the grass-roots national movement that I know we can, at the end of the day they may have the money, but we have the people. And when the people stand together, we can win.”