You are here: Home / Legislature / Democrats call for new rules on policy items in Wisconsin budget 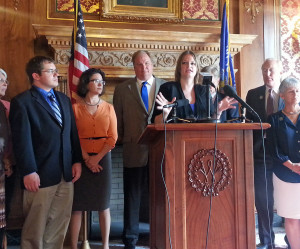 Sparked on by a now-abandoned plan to restrict public access to legislative records, Assembly Democrats are calling for new rules on including policy items in the state budget bill.

The proposal from Assembly Assistant Democratic Leader Katrina Shankland (D-Stevens Point) would require any non-fiscal policy item in the budget to be referred to a standing Legislative committee, where it would have to receive a public hearing and executive session vote. During a Capitol press conference on Monday, Shankland said the change would “give our constituents and everyone around the state ample opportunity to first find out what’s in the legislation, and then…say whether or not they support the idea.”

The move would likely limit the amount of policy added to the state budget bill through a practice both parties have exercised over the years. The process is again the public eye after the Joint Finance Committee last Thursday proposed a major overhaul of the state’s open records law that would have limited public access to information about much of what influences the writing of legislation, then voted on it within hours. Governor Scott Walker and legislative leaders have since promised to remove the measure, in the face of mounting public criticism.

While Democrats have made similar last-minute additions to the budget in the past, Assembly Minority Leader Peter Barca (D-Kenosha) said it’s important to stop it from happening any more. “We’re more interested not in who did what five years ago, ten years ago, twenty years ago,” Barca said. “What can we do over the next year to make sure that this process never happens again, regardless of who is in charge or in the majority in this building?”

The proposal is unlikely to gain much support in the Republican-controlled Legislature.