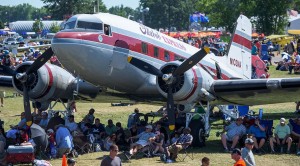 Great weather and a better economy are credited for what could be the largest crowds in a decade at last week’s EAA’s AirVenture in Oshkosh.

According to the final numbers, about 550,000 people attended the week-long international aviation convention that ended last Sunday. It about two-percent more than a year ago.

Some aviation milestones and a world-record skydiving attempt also helped bring out the crowds — along with the usual displays, speakers, air shows, and other entertainment.

EAA Spokesman Dick Knapinski says 2,300 people from a record 80 countries registered at the event’s international tent, setting a new record for the show.

Knapinski says organizers are not getting much of a break. Planning is already underway for the 2016 AirVenture.