You are here: Home / Fires/Accidents/Disasters / Five on board plane in EAA crash 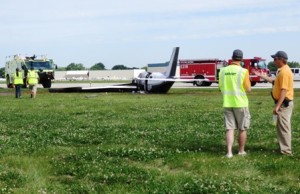 All five people on board a plane that crashed at EAA AirVenture in Oshkosh Wednesday morning were taken to area hospitals. EAA spokesman Dick Knapinski said a Piper Malibu was on approach to one of the runways at Wittman Regional Airport when something went wrong. The airplane crashed. Four of the five people on board exited the plane on their own, the fifth was extracted by Oshkosh firefighters who arrived at the scene within a minute, according to Knapinski.

Flight for Life flew the most seriously injured person out to Theda Clark Medical Center in Neenah. A spokeswoman for Theda Clark said the man is in serious condition, and two other men are in fair condition. Three people were taken to Mercy Medical Center in Oshkosh and are in good condition. A Mercy spokesman said two of them were in the crash and another was nearby when it happened. Knapinski said NTSB and FAA are investigating the crash, which is not expected to affect the afternoon or evening air show.