You are here: Home / Sports / Monroe is the man 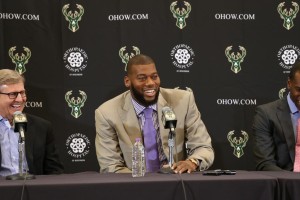 Signaling what the Milwaukee Bucks hope is the end of their frustrating futility, center Greg Monroe has signed a three-year, $50 million contract. The deal was first reported last week, but could not yet be made official because of the NBA’s signing moratorium.

In five seasons with the Detroit Pistons, Monroe averaged 15.9 points, 10.2 rebounds and 2.1 assists per game. Monroe said this was purely a basketball decision, spurning offers to play for the Knicks or Lakers.

“The aspirations, the thing they had in place…nothing else mattered than basketball to me,” Monroe said. “I’m starving for the playoffs…they were there last year, even without Jabari (Parker)…they had everything set up for what I wanted, and everything I needed.”

Monroe revealed two things on Thursday. One, the offers he got from the Bucks were for the same money as the Lakers and Knicks were offering. And two, former Pistons teammate Khris Middleton recruited him heavily for Milwaukee.

“Greg, he can play multiple positions. He’s not just a center. He’s a basketball player,” added Kidd. “His basketball IQ is extremely high.”

General Manager John Hammond said he hoped that the core of Monroe, Khris Middleton, Jabari Parker, John Henson and Giannis Antetokounmpo would remain together for the foreseeable future.