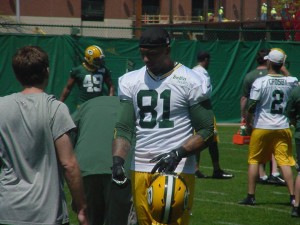 The message from Green Bay Packers head coach Mike McCarthy to his players following minicamp is to recharge the batteries, be ready for training camp and stay out of trouble.  Apparently tight end Andrew Quarless dozed off during that final instruction.

The Packers tight end was arrested on allegations of firing two shots during an argument outside a Miami Beach parking garage early Saturday.

A Miami Beach Police Department report said Quarless had been in an argument with a group of women and fired his gun twice.

The Packers issued a statement that said, “We are aware of the matter involving Andrew Quarless and are in the process of gathering more information.  We will withhold further comment.”

According to the report, a parking attendant saw Quarless and another man leave a garage in a black Porsche.  They came up to a car with a number of women and an argument started.

The attendant said the women were yelling “No, get away, leave me alone!”

The police report said Quarless then took out a handgun, identified as a .45-caliber, and fired the shots.  A woman told police he did it “in an attempt to emphasize his dominance and manhood.”

Police say Quarless then tried to flee the area.  After police chased him, he reportedly hid and put his gun in a potted plant.

Quarless is entering his sixth NFL season out of Penn State.  He caught 33 passes for 354 yards and four touchdowns with the Packers last season.