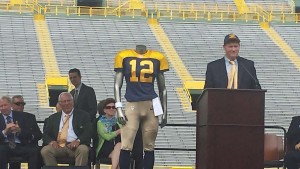 The Green Bay Packers unveiled new throwback jerseys on Tuesday at the teams annual shareholders meeting.  Those jersey’s will be worn for the October 18 game against the San Diego Chargers.

Packers president Mark Murphy said the uniforms honor the teams from 1937 through 1949 that wore similar uniforms.  Those teams won two of the Packers 13 NFL Championships.

NFL rules allow teams to change their alternate third uniform every five years.  In each of the previous five years, the team wore their Acme Packers uniforms, which were throwbacks from the 1929-30 seasons.