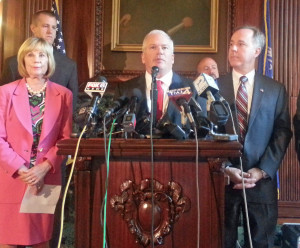 Republican leaders say they have reached an agreement to help move the state budget forward, although whether the plan has the support needed to pass the full Legislature remains in doubt.

Under the deal announced Wednesday morning at the Capitol, the $1.3 billion in bonding for transportation projects proposed by Governor Scott Walker would be reduced by at least $450 million. Controversial proposals to repeal Wisconsin’s prevailing wage law and to provide public funding for a new Milwaukee Bucks arena would also be removed, with plans to take them up as standalone legislation. Assembly Speaker Robin Vos (R-Rochester) said “I think we were able to sit down in good faith, put together a structure that’s going to allow us to finish the budget…get it to the governor’s desk.”

However, Senate Majority Leader Scott Fitzgerald (R-Juneau) admitted support in his chamber remains questionable. “No, I don’t have the votes right now as we stand here,” the Juneau Republican said.

The deal is expected to get the budget out of the Legislature’s Joint Finance Committee, which has seen its work stalled for the past month while lawmakers tried to reach agreements on a handful of remaining issues. The panel is scheduled to meet tomorrow to finalize its work, while the Assembly could open debate on the budget bill as early as next Tuesday.

At the same time as the budget debate, Speaker Vos said his chamber will take up an amended version of a prevailing wage repeal bill that passed out of a committee earlier this year, which he predicted will pass. A plan to help finance a downtown Milwaukee arena will also get a standalone vote, which Sen. Fitzgerald remains hopeful will be taken up next week in his chamber.

Democrats were critical of the budget being proposed by the GOP. State Rep. Chris Taylor (D-Madison) accused them of “following our absentee governor off the cliff,” while even going further in areas like expanding funding for private school voucher programs. “In many instances they’re making this budget even worse than this governor did,” Taylor said.