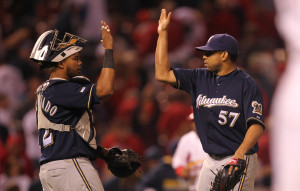 Francisco Rodriguez celebrates one of his 18 saves this season. UPI/Bill Greenblatt

Milwaukee Brewers closer Francisco Rodriguez has been selected to the National League All-Star team for the second consecutive season and the sixth time in his career.

K-Rod is a perfect 18 for 18 in save opportunities with an ERA of 1.45.  Going back to 2014, Rodriguez has converted 23 consecutive saves.  He needs one more save to tie Jeff Reardon for ninth on the all-time list with 367.

Manager Craig Counsell told Rodriguez of the honor before last nights series opener against the Atlanta Braves and said it is well deserved.

Last year, the Brewers had four players selected to the NL All-Star squad, including three starters.