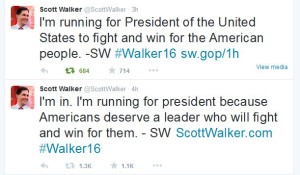 Governor Scott Walker made it official this morning on Twitter – he is running for the Republican presidential nomination in 2016. Walker tweeted from his campaign account “I’m in. I’m running for president because Americans deserve a leader who will fight and win for them.”

The campaign also sent an email announcement out to supporters and released a video on YouTube.

The Republican governor is expected to formally kick-off his campaign later this evening, with a rally in Waukesha. He plans to spend he rest of the week on a cross-country tour of several states key to winning the GOP nomination, including Nevada, South Carolina, New Hampshire, and Iowa.