You are here: Home / Fires/Accidents/Disasters / Toddler tossed from car in Dodge County crash 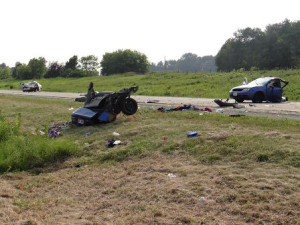 Police say 33-year-old Amy Galica of Oshkosh was traveling south on Highway 151 near the Town of Calamus, when Schmidt says the driver lost control of the vehicle and it began spinning. The car went into the path of a northbound vehicle, which collided with the side of Galica’s car and split it in half.

Among the passengers in her vehicle was a three-and-a-half-year-old girl, who was in a car seat. Schmidt says the girl’s seat was thrown from the vehicle after it split, landing safely nearby. The girl was still strapped in when emergency responders arrived on the scene. Schmidt says the girl appeared to have only minor injuries.

The girl, along with the Galica and 30-year-old Timothy Mcessey of Middleton, were taken to area hospitals for treatment.