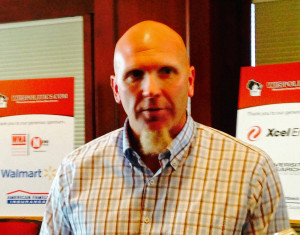 Governor Scott Walker and groups supporting his presidential bid have raised about $32 million dollars so far this year, according to a report filed Monday with state elections officials. Walker’s campaign manager, Rick Wiley, commented on the fund-raising success during a Wispolitics luncheon in Madison on Tuesday.

Wiley noted that Walker likes to joke “that Democrats, one of these days are going to rue the day that he elevated them to such a level.” Nearly $5.9 million of the total was raised by Friends of Scott Walker, which has financed Walker’s races for governor, the rest by his political organization, Our American Revival, and the super PAC, Unintimidated PAC.

“Our ability to raise money out there, I feel good about it,” Wiley said. “Thirty two million is a really good haul.”
.
With Ohio Governor John Kasich’s announcement that he’s entering the race, Walker now has 15 competitors for the Republican nomination. “In terms of everyone else and their money . . . there’s nothing you can do about that,” Wiley said. “Bush has a lot of money, everyone knows that.”

Asked about the perception that Walker has been a divisive politician and would not campaign as “a uniter,” Wiley disagreed. “I think he is running as a uniter,” Wiley said. “He talks often about his love of America and why he’s doing this. He wants Matt and Alex (Walker’s sons) to grow up in United States of America that’s better . . . and I think that is about uniting this country.”

Wiley said he doesn’t pay much attention to national polls, the latest of which showed Donald Trump in the lead among GOP presidential contenders, with Walker in second place. “The ‘Trump factor’ is everyone knows who Donald Trump is” Wiley said. “These national polls are purely name i-d.”